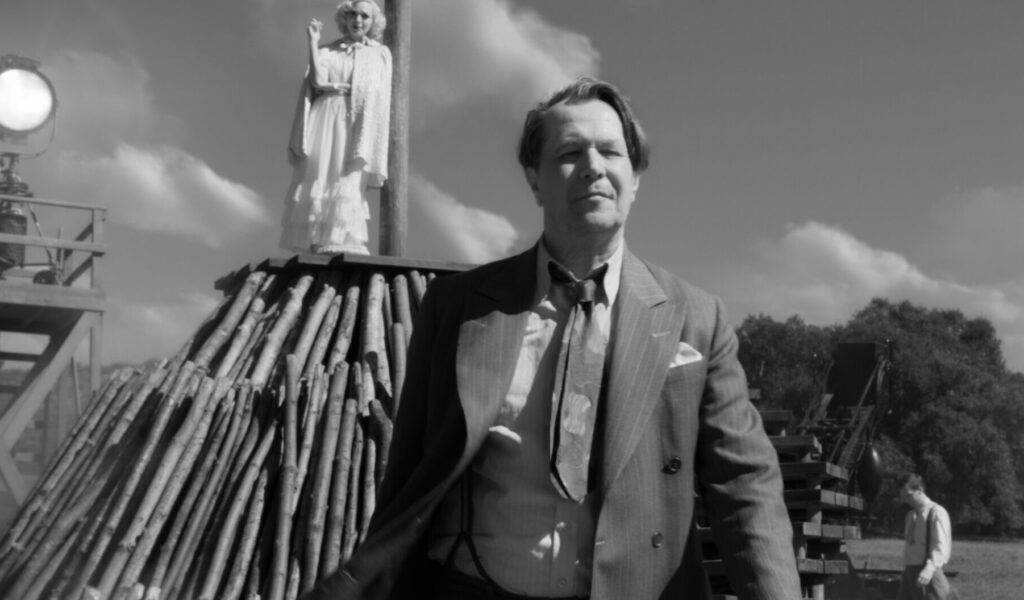 MANK (If you want to see the latest hot title) Vincent Georgie: The prodigiously talented David Fincher has crafted a lavishly designed and impeccably…

(If you want to see the latest hot title)

Vincent Georgie: The prodigiously talented David Fincher has crafted a lavishly designed and impeccably made biographical true story about the screenwriter of CITIZEN KANE, Herman Mankiewicz. Gary Oldman leads a well-cast ensemble of actors, including a never-better Amanda Seyfried, a revelatory Arliss Howard and fans of tv’s “OZARK” will love seeing breakout actor Tom Pelphrey here. Expect a raft of Oscar nominations for this film next year.

Synopsis: 1930s Hollywood is reevaluated through the eyes of scathing wit and alcoholic screenwriter Herman J. Mankiewicz as he races to finish “Citizen Kane.”

(If you are in the holiday spirit)

Vincent Georgie: This doc is perfect to enjoy, perhaps after a day of decorating for the holidays. Focusing on the incredible dance work of legendary choreographer Debbie Allen, you will enjoy the diversity of dance traditions on-screen. A really entertaining night at the movies that you can enjoy with your family.

Synopsis: This documentary spotlights Debbie Allen’s career and follows her group of dance students as they prepare for Allen’s annual “Hot Chocolate Nutcracker.”

(If you can’t wait for the next season of “SUCCESSION”)

Vincent Georgie: HBO’s red-hot Emmy-winning series “SUCCESSION” will not have another season for some time. Anyone who watches the show knows how entertainingly snarky Kieran Culkin is as the jaunty Roman Roy. If you need your dose of Culkin, look no further than his lead performance in this 2002 comedy. No one does arrogantly nonchalant better than him. An all-star cast including Susan Sarandon, Claire Danes and Ryan Phillippe play his insufferably wealthy family, friends, and foes.

Synopsis: Igby Slocumb (Kieran Culkin), a rebellious and sarcastic 17-year-old boy, is at war with the stifling world of old money privilege he was born into. With a schizophrenic father (Bill Pullman), a self-absorbed, distant mother (Susan Sarandon), and a shark-like young Republican big brother (Ryan Phillippe), Igby figures there must be a better life out there — and sets about finding it.

This weekend, how about settling in for a night of memorable thrillers?

Vincent Georgie: Kathy Bates and Jennifer Jason Leigh are unbelievable in this Stephen King adaptation about a positively miserable woman and her adult daughter, navigating a mystery surrounding the death of an elderly woman under the mother’s care. Shot in Nova Scotia, the film is dark and beautifully told both in present and in flashback. The black-as-coffee lead performances here are worth the price of admission alone.

Vincent Georgie: A hit at Sundance 2011, this is the film that put young Elizabeth Olsen on the map as a young woman who tries to escape a cult, with the help of her sister. John Hawkes is one of our best character actors, and he is in fine form as the charismatic cult leader. The film has a relationship with stillness that is captivating. The final scene of the film is haunting and correct.