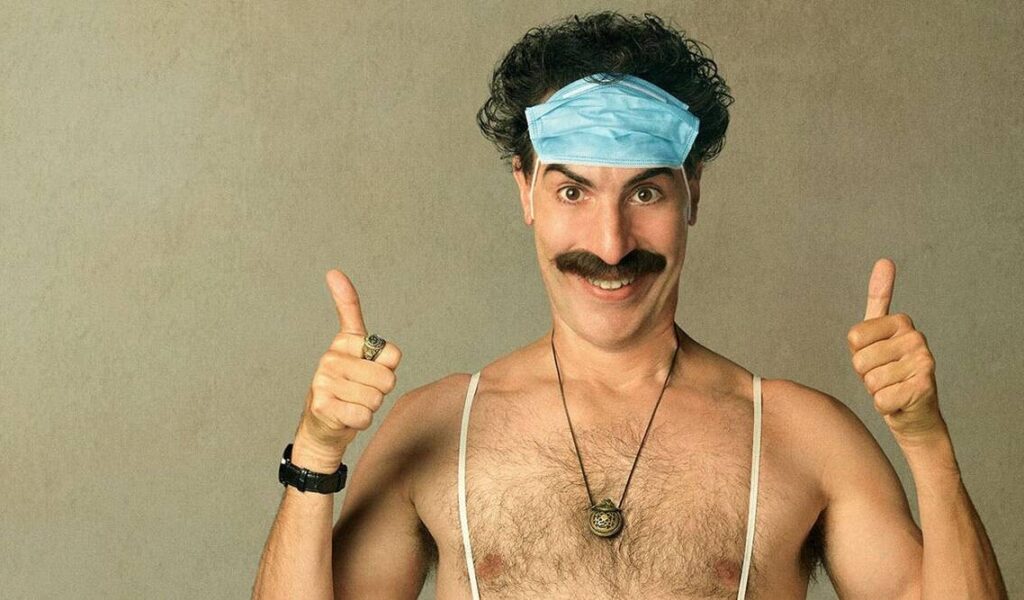 BORAT THE SUBSEQUENT MOVIEFILM (If you want something oh so timely)   Vincent Georgie: Sacha Baron Cohen is a fascinating comedian because he is so…

(If you want something oh so timely)

Vincent Georgie: Sacha Baron Cohen is a fascinating comedian because he is so unbelievably risky in his high-concept humour. This sequel – just like him – is definitely not for all tastes. It’s crass and vulgar, sure, but I argue that it’s also funny, timely and fearless. And Rudy Giuliani…yikes…

Synopsis: Released from prison for bringing shame to his country, Kazakh funnyman Borat risks life and limb when he returns to America with his 15-year-old daughter.

(If you want to laugh, sing, and cheer)

Vincent Georgie: This Australian film about a woman obsessed with both her dream wedding and with ABBA, is memorable for how much it made us love its funny, lovable but darkly flawed characters. It also notably introduced us two of our best character actresses: the versatile Toni Collette (THE SIXTH SENSE, LITTLE MISS SUNSHINE and THE HOURS, amongst others) and the sublime Rachel Griffiths (best known for her many Emmy nominations for the series “Six Feet Under”). The ABBA soundtrack is ridiculous, rallying, and perfect.

Synopsis: Although she’s never had a date, a young woman goes about the business of landing herself a husband.

(If you love complicated families)

Vincent Georgie: A terrific film from WIFF 2013, this stars UWindsor alumn Cara Gee as a woman struggling to keep her difficult relationships to both her daughter and her mother afloat. As a special treat for our audience at Festival, Cara returned to Windsor for a surprise to support the film. Catch this moving, well-performed Canadian drama.

Synopsis: Lena flees to her rural hometown after her 13-year-old daughter’s overdose attracts the attention of child services. She reunites with her estranged mother and is forced to face a past she has tried to ignore.

She’s one of my very favourite actresses because I can never quite pinpoint why her work is so particularly brilliant, except that it is always intelligent and defiant. She’s currently getting another round of stunning reviews for her upcoming film NOMADLAND, including all sorts of Oscar buzz. In honour of this, let’s go back and revisit her two Best Actress Oscar winning performances in FARGO (her most iconic work) and THREE BILLBOARDS OUTSIDE EBBING MISSOURI (her most incendiary performance). McDormand owns those films. Refresh yourself on how strong she is with this double-feature.