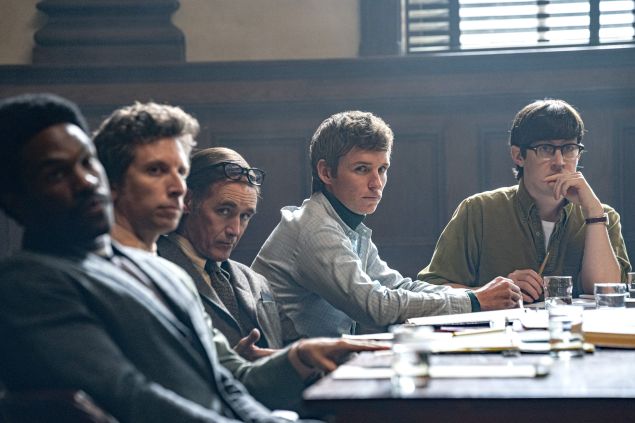 THE TRIAL OF THE CHICAGO 7 (If you want to see this year’s Oscar front-runner) Vincent Georgie: Get ready for the hot title of…

THE TRIAL OF THE CHICAGO 7

(If you want to see this year’s Oscar front-runner)

Vincent Georgie: Get ready for the hot title of the Fall and it’s available to you right now. Writer-director extraordinaire Aaron Sorkin has assembled an all-star cast for his hyper-intelligent, profound and engrossing drama. Sacha Baron-Cohen (in a rare dramatic part), Eddie Redmayne, and recent Emmy winners Jeremy Strong (“Succession”) and Yahya Abdul-Mateen II (“Watchmen”) lead a spectacular ensemble. This was definitely going to be a WIFF 2020 title. Don’t miss it.

Synopsis: The film is based on the infamous 1969 trial of seven defendants charged by the federal government with conspiracy and more, arising from the countercultural protests in Chicago at the 1968 Democratic National Convention. The trial transfixed the nation and sparked a conversation about mayhem intended to undermine the U.S. government.

HOW TO BUILD A GIRL

(If you love coming of age stories)

Vincent Georgie: Heading into 2020, this film was pegged to be a breakout title thanks to the endlessly charismatic performance of Beanie Feldstein, who we loved in LADY BIRD and loved even more in BOOKSMART. Well, nothing in 2020 has gone as planned. Thus, this film got sidelined. Another title that was surely going to join us in Windsor for WIFF 2020. Sensing a trend yet?

Synopsis: A teenager living with her working-class family on a council estate in Wolverhampton, England, grows up to become a popular but conflicted music journalist.

Vincent Georgie: 2019 sensation and Oscar juggernaut PARASITE took audiences around the world by storm, including at our deeply sold out screenings during WIFF 2019 (remember everyone pouring out of the Chrysler after that one? It was the best chaos, with folks walking out in a daze while discussing the film). Well, director Bong Joon-ho has upped the ante and released an elegant black & white version of the film. The performances and production design have an added crispness that elevate an already exceptional film. See it again, differently. And, as with the trend, our programmers pegged this new version of the film back last Winter and we had it ready to go for this Fall for you. Oh, 2020…when will you be over?

Synopsis: Bong Joon Ho’s PARASITE, the international hit that has become one of the most acclaimed films of 2019, has been re-crafted as a black and white film by the master filmmaker. Winner of 4 Academy Awards including BEST PICTURE and BEST DIRECTOR, PARASITE is now available in Black and White. Born from a desire to make a monochrome feature, the multi-award-winning Director has said of this alternate version “It (is) fascinating to see how the viewing experience changes when an identical film is presented in black and white.”

The year we stopped taking Meryl Streep for granted

Vincent Georgie: It’s hard to imagine that we ever took Streep for granted. She has long been acknowledged as our greatest actress. But, in fact, audiences & critics alike had their eyes glazed over by Streep’s performances and films in the late 90s and early 2000s. She was always great, without being memorable, and the films were mostly forgettable. Well, then came 2002. As if completely re-invigorated by highly creative directors and strong scripts, Streep took us all by surprise with her ludicrous and original turn in ADAPTATION, opposite Nicolas Cage and Chris Cooper, followed by another A+ star turn in the prestige drama THE HOURS, alongside Nicole Kidman and Julianne Moore. Both of these titles kicked off a whole new era of adoration and appreciation for the actress. Take a look at these two fine films together and see why they are credited as leading to the most recent renaissance of her career.