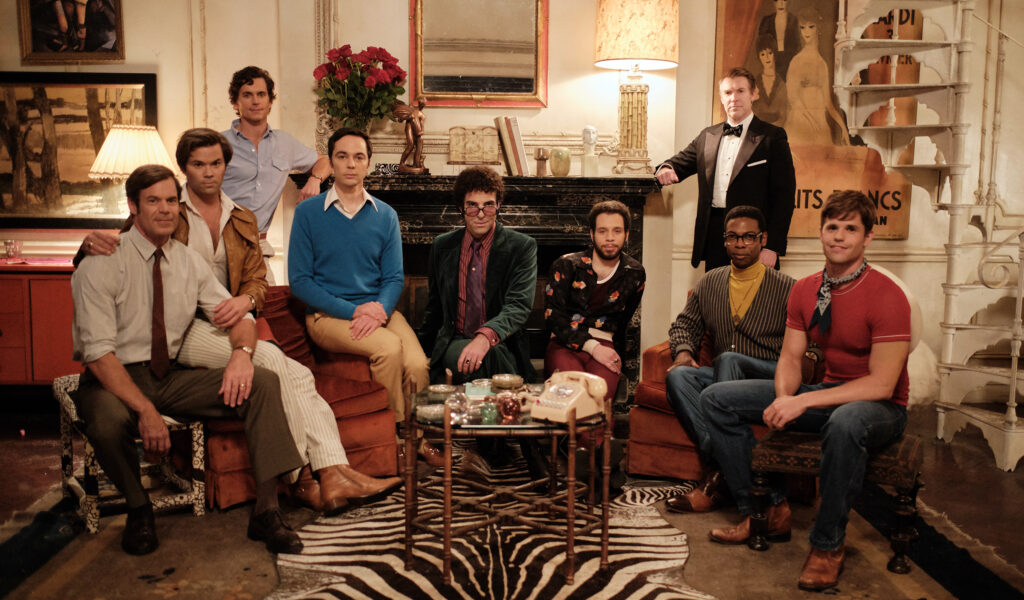 THE BOYS IN THE BAND (If you want to see a red-hot new title)   Vincent Georgie: This film adaptation of the seminal stage play…

THE BOYS IN THE BAND

(If you want to see a red-hot new title)

Vincent Georgie: This film adaptation of the seminal stage play has a starry cast lead by Matt Bomer, Jim Parsons and a really terrific Zachary Quinto. This is another singular project from creator-extraordinaire Ryan Murphy. Entertaining and emotionally compelling characters abound.

Synopsis: A visitor turns an evening upside down when he interrupts a gathering of gay men in New York City in 1968.

(If you’re craving an adult romance)

Vincent Georgie: Truth be told, when we think of star-crossed lovers, most of us never quite as imagining Holly Hunter and Danny DeVito. And that would be a real miss, because this criminally underseen romantic drama works beautifully thanks to their lived-in performances and easy chemistry. That being said, the MVP of this film is breakout star Queen Latifah, stealing every scene that she is in (which is always the case, is it not?).

Synopsis: After being unceremoniously dumped by her husband, 40-something divorcée Judith Moore (Holly Hunter) tries to make sense of her new existence. She becomes friends with Pat Francato (Danny DeVito), the elevator operator in her high-rise apartment building, who is having marital problems of his own. She also dabbles in a new romance with an attractive masseur, and lets loose in a nightclub ruled by a torch singer, Liz Bailey (Queen Latifah), with whom she soon connects.

CASTLE IN THE GROUND

(If you love great Canadian films)

Vincent Georgie: This is a powerful, extremely well-acted, emotionally demanding story of opioid addiction set-in in Sudbury. Writer-Director Joey Klein joined us at WIFF 2019 to share this haunting story of an innocent community much like ours, dragged into the hells of addiction, violence and loss. I have seen this film twice in the past year, and I still think about this story and these characters on a weekly basis.

Synopsis: Henry (Alex Wolff), is a caretaker more than teenager, of himself, his home, but most importantly of his chronically ill single mother (Neve Campbell). His girlfriend (Star Slade) is leaving for college, and his ascetic Jewish relatives and their obligatory condolences frustrate more than comfort. When his mother finally passes, Henry is left without purpose, alone for the first time with a crippling grief, and struggling with the knowledge that he was complicit in his mother’s drug-induced death. The only person in his life that isn’t placating to his loss is his loud, subversive yet charismatic neighbor Ana (Imogen Poots), who lives across the hall and is trying to kick her own drug habit. He quickly becomes attached to Ana, who fills the void his late mother left, and simultaneously stumbles into the world of opioids, becoming entangled in a web of violence, crime, and addiction.

(If you’re a fan of Terrence Malick)

Vincent Georgie: A beautifully shot, lyrical film is a return to form for the maverick filmmaker of DAYS OF HEAVEN and THE TREE OF LIFE. While some of his recent films went off the rails in their attempts at visual poetry, this film is a more self-assured and focused story set during WWII. The cast of German newcomers and established stars alike are uniformly terrific.

Synopsis: Based on real events, from visionary writer-director Terrence Malick, A HIDDEN LIFE is the story of an unsung hero, Franz Jägerstätter, who refused to fight for the Nazis in World War II. When the Austrian peasant farmer is faced with the threat of execution for treason, it is his unwavering faith and his love for his wife Fani and children that keeps his spirit alive.