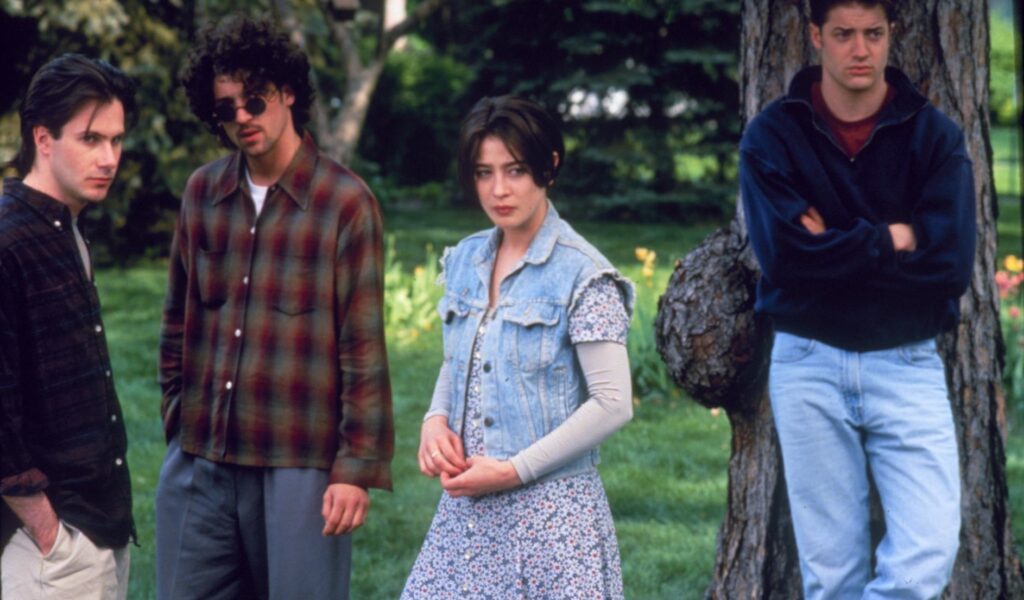 Celebrating everyone headed to a University or College campus this week (or anyone that sent someone off to school).

(If you’re off to campus)

Vincent Georgie: Celebrating everyone headed to a University or College campus this week (or anyone that sent someone off to school), enjoy the ivy league halls and dynamic relationships of this Harvard-set campus drama. While the film has oddly been forgotten by pop culture, the sensitive themes of the film, appealing cast (more on Brendan Fraser later on) and terrific Madonna song (“I’ll Remember”) make it a lesson worth learning.

Synopsis: Monty is a student, and when his computer crashes, he’s left with only a single paper copy of his thesis. Frightened of losing it, he immediately rushes out to photocopy it, only to stumble and drop it down a grate. Searching the basement of the building, he discovers that it has been found by Simon, a squatter. Simon makes a deal with Monty: for everyday’s accommodation and food that Monty gives him, he will give a page of the thesis in return.

(If you want a quality drama)

Vincent Georgie: This dramatic WWII mystery is intriguing and plays to star Kristin Scott Thomas‘ strengths as an actress: beguiling, regal and difficult to read. The film is criminally under-seen. Snap this one up.

Synopsis: Academy Award nominee Kristin Scott Thomas stars as Julia Jarmond, an American journalist living in Paris with her French husband and teenage daughter. When Julia is commissioned to write an article about the notorious 1942 Vel d’Hiv Roundup, she stumbles upon a secret which will change her life, and that of her family, forever. Julia’s research draws a connection between the family apartment that she and her husband are renovating, and its former residents, the Jewish Starzynski family. Resolving to discover what became of them, she finds herself focusing on the fate of their daughter, Sarah, in an investigation that takes her across France and even back to America. The more Julia unearths, the more she discovers about Bertrand’s family, about France and, finally, about herself.

THE RETURN OF BRENDAN FRASER

After receiving a scholarship to an exclusive prep school, working-class teen David Greene becomes a star athlete and wins the attention of a beautiful debutante. But the ties of his newfound friendships are broken when a student reveals the secret David has tried to conceal–he is Jewish. Now David must take the most important stand of his life, one that will touch the lives of many and forever change the course of his future.

It’s 1957, and James Whale’s heyday as the director of “Frankenstein,” “Bride of Frankenstein” and “The Invisible Man” is long behind him. Retired and a semi-recluse, he lives his days accompanied only images from his past. When his dour housekeeper, Hannah, hires a handsome young gardener, Clayton Boone, the flamboyant director and simple yard man develop an unlikely friendship. This powerful and poignant relationship will change their lives forever.