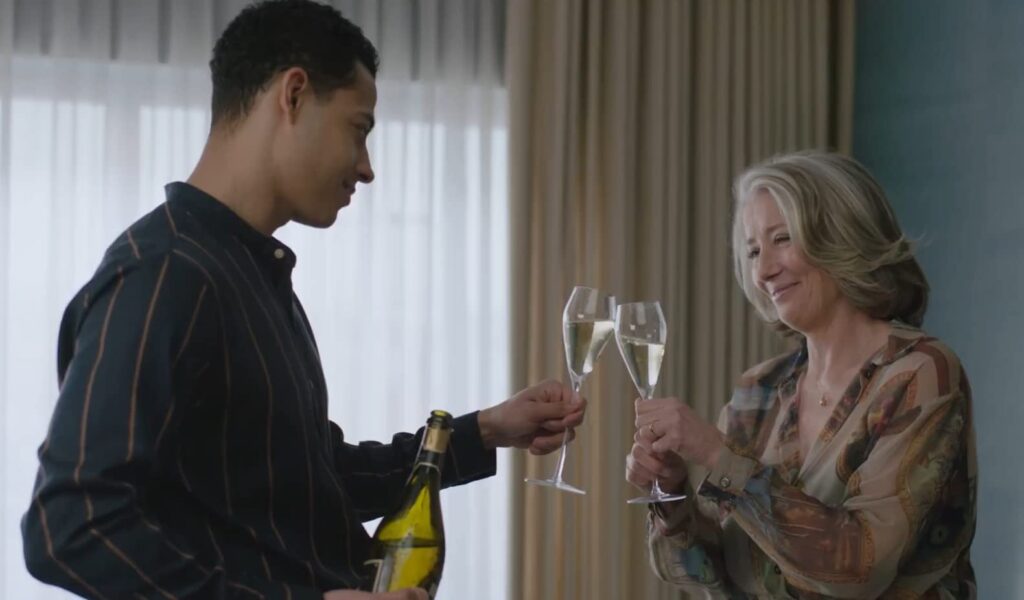 GOOD LUCK TO YOU, LEO GRANDE (If you want a sex positive story) Vincent Georgie: The long-established, multi-Oscar winning Emma Thompson just got the…

GOOD LUCK TO YOU, LEO GRANDE

(If you want a sex positive story)

Vincent Georgie: The long-established, multi-Oscar winning Emma Thompson just got the most energetic and refreshing career left-turn by being paired with twenty-something rising star Daryl McCormack. She is substantial, beautiful and hilariously neurotic; he is twinkly-eyed, elegant and self-assured. Their chemistry in the most offbeat of sexual and humane scenarios makes you root deeply for both of them. Don’t miss this breath-of-fresh-air of a film.

Synopsis: Retired widow Nancy Stokes hires a good-looking young sex worker called Leo Grande, in the hope of enjoying a night of pleasure and self-discovery after an unfulfilling married life.

THIS FILM IS NOT YET RATED

(If you want an inside look at the film industry)

Vincent Georgie: This documentary goes straight to the central issues driving battles around film ratings and ratings boards. Issues of sexism, homophobia and double standards abound. You are getting a palpable inside at the unfair fights that filmmakers and producers alike are faced with when trying to earn a rating they are hoping for, or defend themselves against a rating that is seemingly too harsh.

Synopsis: You are getting a palpable inside look at the unfair fights that filmmakers and producers alike are faced with when trying to earn a rating they are hoping for, or defend themselves against a rating that is seemingly too harsh. Filmmakers Kimberly Peirce, Wayne Kramer, Michael Tucker and Matt Stone are among those who give commentary in Kirby Dick’s examination of the Motion Picture Association of America and the standards and methods its ratings board uses to rate the movies.

Not available on major online distributors.

THE LADY IN THE VAN

(If you love Maggie Smith)

Vincent Georgie: And who doesn’t love Maggie Smith? In an appealing lead-role that is firmly in her strike-zone, Smith shines. A favourite from WIFF 2015.

Synopsis: The true story of Miss Shepherd, an eccentric woman of uncertain origins, who `temporarily’ parked her broken-down van in writer Alan Bennett’s London driveway, and proceeded to live there for the next 15 years.

THE GONE AND NOT FORGOTTEN DUDLEY MOORE

We lost Moore over 20 years ago, but his singular wit and energy remain all his own. His breakthrough, Oscar nominated performance in ARTHUR announced the arrival of a major comedic star, while his gently duplicitous romantic in MICKI & MAUDE (ably supported by both Ann Reinking and Amy Irving) confirmed he could make you root for him, even when you did not agree with his choices. He’s worth remembering and revisiting.

Wealthy New York City playboy Arthur Bach is perpetually drunk and completely rudderless. Dutifully supported by his sharp-tongued and quick-witted butler, Hobson, Arthur reluctantly prepares to enter into an arranged marriage with heiress Susan Johnson. When he meets Linda Marolla, a waitress from Queens, he falls head over heels in love, but if he backs out of his engagement with Susan, he may lose his fortune.

When television reporter Rob feels stuck in his marriage to Micki, he falls for Maude during an interview. Maude tells Rob that she is pregnant, and he prepares to divorce Micki and start a new life with Maude. But Rob has a problem: Micki is pregnant too. Now a bigamist, Rob must balance his career, his two separate wives and his new responsibilities as a father while hiding the two women from each other.