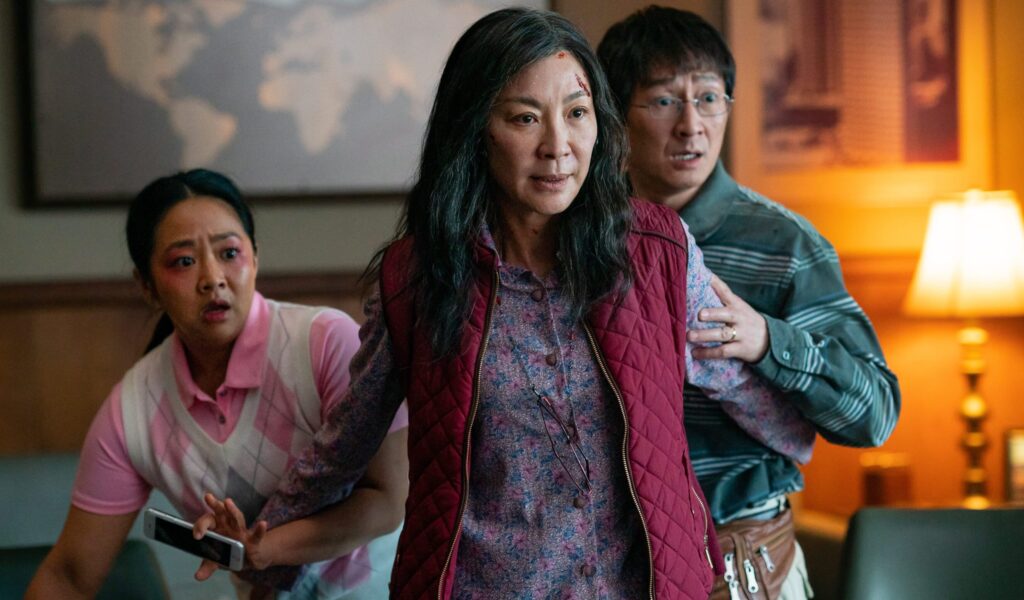 EVERYTHING EVERYWHERE ALL AT ONCE (If you want the breakout hit of 2022) Vincent Georgie: Now taking the crown as the highest-grossing film ever…

EVERYTHING EVERYWHERE ALL AT ONCE

Vincent Georgie: Now taking the crown as the highest-grossing film ever released by indie boutique label A24, this incredibly original, visually tremendous, conceptually labyrinthian action film makes most films look lame and stale by comparison. Credit to the tremendous actress Michelle Yeoh, and directing team duo The Daniels (aka Daniel Kwan and Daniel Scheinert). This one is a real experience and should not be missed.

Synopsis: When an interdimensional rupture unravels reality, an unlikely hero must channel her newfound powers to fight bizarre and bewildering dangers from the multiverse as the fate of the world hangs in the balance.

(If you want a rewarding human drama)

Vincent Georgie: Taking the Grand Prix at Cannes 2021, this Finnish film is primarily a two-hander between a Finnish student and a Russian brute that happen to share a sleeper car together on a train ride to the arctic circles. The film is perfectly slow, deliberate and, ultimately, absorbing.

Synopsis: A Finnish student and an uncouth miner slowly forge a hesitant connection when they throw together in cramped train quarters on a journey across Russia.

(If you love Adam Sandler’s dramatic side)

Vincent Georgie: While this new Netflix drama is rather straightforward, it is anchored by a sincere and mature lead performance by Adam Sandler. He once again proves that when given quality material, he rises to the occasion every time. Queen Latifah is spot-on, as expected, in a supporting role.

Synopsis: After a down-on-his-luck basketball scout discovers an extraordinary player abroad, he brings the phenom back without his team’s approval.

I discovered firsthand how passionate travellers and journeypersons are to take on this incredible, perspective-giving trek of walking the Camino. We showed THE WAY at WIFF 2011 and I was stunned at not just how many people attended the film but how important/intriguing the conversations were that followed. A few years later, we brought WALKING THE CAMINO: SIX WAYS TO SANTIAGO which was popular and I remember so many people in the audience sharing their own stories of doing the walk, or of their newfound inspiration to take it on.

Directed by Emilio Estevez, THE WAY is the story of one man’s struggle to complete a physical and spiritual journey that his son has left behind. It’s meant to be a solitary journey, but Tom quickly gains unwanted companions who find different ways to melt the grumpy American’s defences. This spirited road movie crosses territories that are comic, adventurous and keenly moving.

Filmmaker Lydia Smith follows a group of hikers as they make the arduous, 500-mile trek to the shrine of St. James in Galicia, Spain.