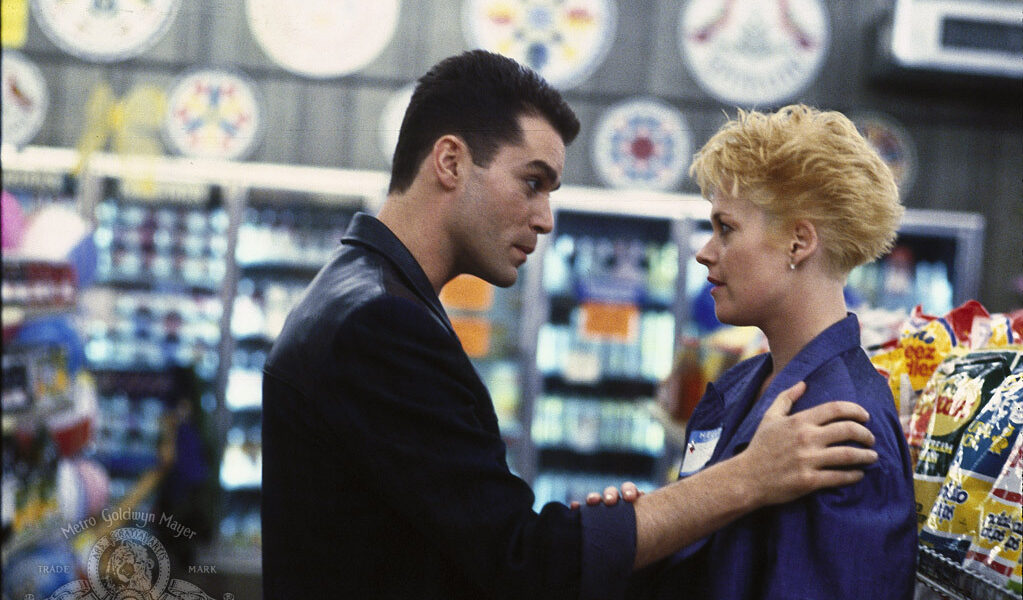 SOMETHING WILD (If you want the other side Ray Liotta) Vincent Georgie: We lost the excellent Ray Liotta last week, and we certainly all…

(If you want the other side Ray Liotta)

Vincent Georgie: We lost the excellent Ray Liotta last week, and we certainly all immediately thought of his career-defining role as Henry Hill in GOODFELLAS. However, one of Liotta’s biggest beefs was that the film industry was never able to see him as anything other than a gangster-type for the years to come. Let me point you in the direction of this fun, energetic and highly entertaining romantic comedy. In a perfect triangle with Melanie Griffith and Jeff Daniels, Liotta is very charismatic and frequently hilarious.

Synopsis: Free-spirited Lulu sets her sights on uptight banker Charles for a little bit of fun. Their relationship starts off simple enough with a tryst and some modest adventure, but Lulu wants Charles to pose as her husband at a high school reunion. It seems harmless enough to Charles, but that all changes when Lulu’s actual husband, Ray, confronts them at the event. Understandably, Ray isn’t content to let Charles and Lulu ride off into the sunset.

Watch on The Criterion Collection

(If you want a film that will spark conversation)

Vincent Georgie: A favourite from WIFF 2014, this comedy will unquestionably spark some interesting discussions for any romantic partners watching the film together. And don’t think that you know where this is going…because you’ll be wrong. A smart, rather intriguing comedy. While it was remade more recently as the failed Will Ferrell/Julia Louis-Dreyfus comedy DOWNHILL, you will surely be in better hands with the original. Filmmaker Ruben Ostlund is on a major streak right now, taking 2 Palme d’Or in a row for his last two films. Not too shabby.

Synopsis: A man’s selfish reaction to the danger posed by an avalanche causes cracks in his marriage and relationships with his children.

(If you love a good thriller)

Vincent Georgie: Filled with an excellent cast of veterans, newcomers and supporting players in leading roles, MARGIN CALL will be ideal for fans of films with high-stakes corporate intrigue such as GLENGARRY GLEN ROSS, WALL STREET and BOILER ROOM. A taut and sharp drama awaits you.

Synopsis: When an analyst uncovers information that could ruin them all, the key players at an investment firm take extreme measures to control the damage.

In celebration of the Queen’s Jubilee, take a look at two top notch, Oscar winning films showcasing Elizabeth II herself in adult life (in THE QUEEN, impeccably played by Helen Mirren) and then consider Elizabeth II as a child via a story about her parents (in THE KING’S SPEECH, with Colin Firth as her father).

In the wake of a national tragedy, the prime minister and royal family find themselves quietly at odds. The initial reluctance of Buckingham Palace to mourn Diana is seen by the public as a sign of cool emotional distance, but Tony Blair, perceiving a potential public-relations disaster in the making, takes it upon himself to persuade Queen Elizabeth to pay tribute to the dead princess.

England’s Prince Albert must ascend the throne as King George VI, but he has a speech impediment. Knowing that the country needs her husband to be able to communicate effectively, Elizabeth hires Lionel Logue, an Australian actor and speech therapist, to help him overcome his stammer. An extraordinary friendship develops between the two men, as Logue uses unconventional means to teach the monarch how to speak with confidence.