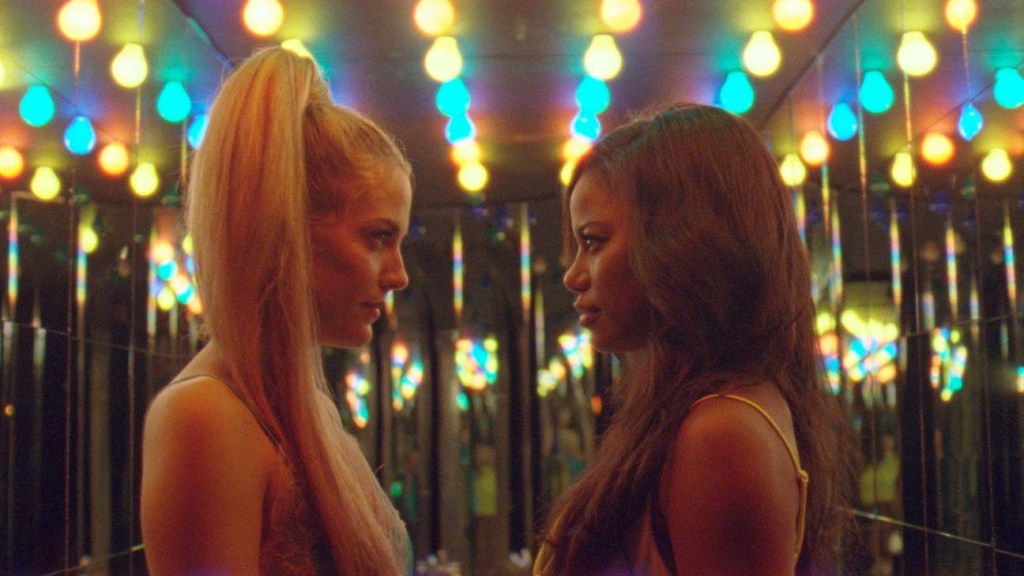 ZOLA (If you want a film that was born on Twitter) Vincent Georgie: Like some kind of social experiment gone right, ZOLA is a…

(If you want a film that was born on Twitter)

Vincent Georgie: Like some kind of social experiment gone right, ZOLA is a film that started as a 148-tweet story. You read that correctly. This film’s genesis is not a novel or a play, but a long twitter tirade that was so good, so salacious and so popular that it was turned into a film. The biggest surprise of all, no doubt, is that the film is really quite terrific, energetic and well-worth watching.

Synopsis: Zola, a Detroit waitress, is seduced into a weekend of stripping in Florida for some quick cash — but the trip becomes a sleepless 48-hour odyssey involving a nefarious friend, her pimp, and her idiot boyfriend.

Vincent Georgie: Surely one of Woody Allen‘s best films, he tells a story of moral shading, ethical compromises and good people navigating increasingly dark circumstances in their personal lives. The cast is really strong, with Martin Landau, Anjelica Huston and Sam Waterston each standing out (among many others). A high-quality drama, with some shades of humour to be sure.

Synopsis: Judah is a philandering eye doctor who wants to preserve his marriage, and his dangerous brother Jack comes up with what appears to be the only viable solution. Certain that his mistress is about to tell his wife about his affair, Judah agrees to Jack’s murderous plan. Twinned with Judah’s tale is that of Cliff Stern, a documentary filmmaker whose problems, which involve love and art, are tame but funny.

Not available to stream online.

(If you want an all-star cast)

Vincent Georgie: No filmmaker was more talented or energized by working with an endless roster of actors telling an epic story than American Maverick, Robert Altman. His incredible, sprawling 22-character film adaption of Raymond Carver’s short stories was identified as a masterpiece upon its initial release and that status has only cemented itself over time. And the cast? Julianne Moore, Jack Lemmon, Lily Tomlin, Tim Robbins, Frances McDormand, Jennifer Jason Leigh, Tom Waits…and on…and on…and on. An incredible saga of sordid Los Angeles lives.

Synopsis: Many loosely connected characters cross paths in this film, based on the stories of Raymond Carver. Waitress Doreen Piggot accidentally runs into a boy with her car. Soon after walking away, the child lapses into a coma. While at the hospital, the boy’s grandfather tells his son, Howard, about his past affairs. Meanwhile, a baker starts harassing the family when they fail to pick up the boy’s birthday cake.

Available through the Criterion Collection

THE PEOPLE VS LARRY FLYNT

Pursued by opponents who say his “Hustler” magazine breaks decency laws, pornographer Larry Flynt hires lawyer Alan Isaacman to help fight his legal battles. A zealot shoots the men near a Georgia courthouse, and though Flynt discovers he’ll never walk again, his fighting spirit — like his love for stripper Althea Leasure — stays strong. Ultimately, the unlikely free speech warrior takes his biggest case to a showdown at the Supreme Court.

MAN ON THE MOON

Jim Carrey stars as the late Andy Kaufman, who was considered one of the most innovative, eccentric, and enigmatic performers of his time. A master at manipulating audiences, Kaufman could generate belly laughs, stony silence, tears or brawls. Whether inviting the audience out for milk and cookies or challenging women to inter-gender wrestling matches, he specialized in creating performances so real that even his close friends were never sure where the truth lay.